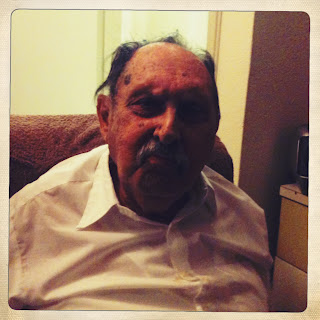 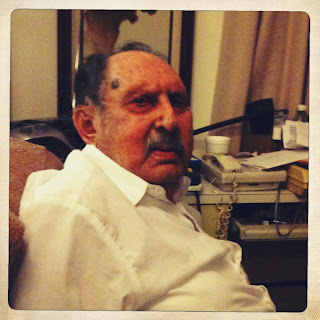 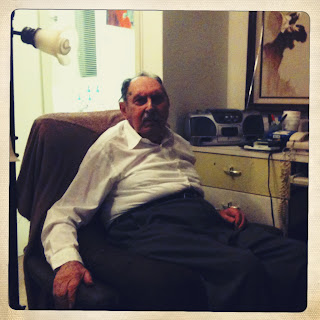 Grandpa's Obituary -L.A.Times:
Aug. 31, 1911-Nov. 12, 2010
Another cherished member of the Greatest Generation has passed at age 99. Ralph Morgulis was born and raised in New York City where he attended Brooklyn College of Pharmacy. In 1936 he married Elizabeth Feinstein who was the light of his life for 63 years. They started their married life in NYC and in 1946 moved to Los Angeles where they owned and operated several drugstores. Always artistic, Ralph became an accomplished painter in his later years. Ralph was blessed with a fine family and countless wonderful friends. His positive attitude and gentle ways will be sorely missed by all who knew and loved him.
Grandpa Ralph celebrated his 99th birthday a month and a half ago.

The L.A. Times missed a few important details in his obituary, so here's a few recollections of my own about him.

He was one of those old school Grandpas.

He had a mustache.

He had a favorite lounge chair.

He watched the world change and he went with the flow.

He was a musician, a painter, a golfer, a swimmer, a Lakers fan, a carpenter, a pool shark, an extremely logical thinker and a dancer.

He played the accordion, the mandolin, the piano and the organ. He was in a "Mandolin Orchestra" for a time and later had his own group (with my dad) called The Geritones.

He married Elizabeth (aka Grandma) in New York and they settled down in Tarzana, CA. They had a movie star home and a beautiful backyard full of palm trees and fruit trees and a waterfall and a kidney shaped swimming pool with an extra bouncy diving board. I spent my youthful summers there, mostly with Grandma, because Grandpa worked long hours as a pharmacist/drug store owner. Grandma drove a pale yellow Cadillac nicknamed "the boat" due to it's size. They had a remote controlled automatic garage door before anybody. I broke it the first week they got it by pushing the up/down button too many times in rapid succession.

In the eighties, I always brought friends over their house - some to hang out and swim, but sometimes I would have band rehearsals or recording sessions in the house when the grandfolks were on vacation. Many of my friends knew the house, if not my actual grandparents.

In the 1990s he and my Grandma often went folk dancing in Santa Monica and I would meet them for an early dinner. Grandma died in 1999, and while things would never be the same without her, he lived a beautiful and peaceful life full of art and music, family and friendships & dancing and laughter.

At his 99th birthday party about 75 people attended. Everyone danced and sang and ate and drank. It was a real celebration of the man. People argued over who would sit next to him at dinner. He insisted I sit next to him so we could talk and catch up, which we did. He wanted to know what was going on in my life, with my writing and with some of my friends. Virtually everyone came up to me and told me how important my grandfather was in their life. At the end of the night, after the party, I spent some time with him in his room and took the photos seen here. The last photos of him I will ever take.

I think I mighta been to Grandpa Ralph's house one time in the 80s with Ryan and you and the first Psychedelic Furs LP ("Stupid on a Stein-a-way...") and we did some recording and then all three slept on this one big bed--two on the outside and one on the inside with his feet where the other two's heads were (or maybe that was another time when we were too drunk to drive?)

I liked your obit for him alot. Family is important.