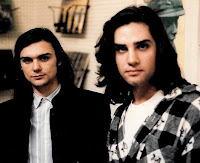 Nix x2.
Nick and Nick.
Two guys in their 20s with long hair.
One a musician, the other a fan.
There really isn't much more to the story than that. We met a time or two - exchanged a postcard once - and ultimately he fell to underground obscurity. One hit wonderism. But I was there to begin with.
Nick Laird-Clowes and myself at Texas Records, Santa Monica

It was Valentine's Day*. I went to Tower Records in Sherman Oaks - his band - The Dream Academy - was behind a table while a decent sized crowd waited in line for the band's autographs. Pushing kids along and keeping things moving was a woman I had met several times in different settings, all related to the music industry. She was a VP of marketing or something at Warner Bros.
Kate St. John & Nick Laird-Clowes @ Tower Records, Sherman Oaks (WB exec Cat Lincoln behind Nick) 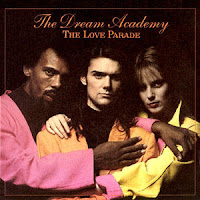 It was pouring rain that night.
The water was coming up over the curb on Ventura Blvd because the streets were so flooded. I chose this night to venture out with my Mom's Nikon camera from the 70s and attempted to figure out the dials and stuff and take pictures. I never quite got the hang of it. None of the pictures came out - except the one above.
Cover art for The Love Parade single
Dream Academy were Nick Laird-Clowes - vocals/guitar, Kate St. John - oboe and Gilbert Gabriel - keys. Their first album was produced by David Gilmour.
Their first single "Life in a Northern Town" was a worldwide success charting at #7 on the U.S. Billboard Chart. The song also made #15 in the UK Singles Chart. The follow-up single, "The Love Parade" reached #36 on the US Billboard Chart and #68 on the UK Chart.
*It was this night I would meet my ex-wife (unfortunately).
That's a whole 'nother story.
Love Parade lyrics:
Look out your window any day
from June to September the love parade's
out on the street where you live and you know
it's just a matter of time before it takes over
They've been married for so many years
now a young love seranade blows sweet nothing in her ear
they're lonely together, when they're not apart
it feels like she's holding on to someone else in the dark.
Oh the love parade is on
even against all odds
it'll go on forever
the love parade
only matinee shows
the love parade.
But if he could put himself into a different skin
he'd be worrying about what he's let himself in for
hanging in the air apparent
a point of view almost transparent
So you sold your soul for a pocket full of sweet talk
forget-me-not kisses at the end of a slow walk
and when it's done you put your world back on
'cause she's otherwise engaged married to someone
Oh the love parade goes on
even when you're gone
it'll go on forever
the love parade

this is fully befitting my mood and mode at the moment...
love never leaves my mind of course, but it's become my mission these days; to infect as many as possible with mad love disease...
...Cyber Prick!
*~DL aka GB aka NE aka....