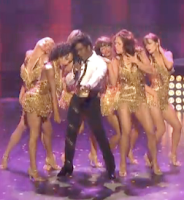 Dezmond Meeks is already a star.

A cross between "Prince and Little Richard" (-Piers Morgan), I've seen Dez perform many times in many different venues and every performance is always fresh, amazing and uniquely "Dez-ian" (-Nick Faigin)! Tonight Dez strut his multi-talented stuff in front of the world starring in a huge production number on the TV show "America's Got Talent", that had him singing "Satisfaction" (-Rolling Stones), dancing, playing piano and sharing the stage with half a dozen gold lamé wearing dancers - one of whom jumped on top of his piano, erotically squeezed her chest and then proceeded to spin from a chandelier suspended from the ceiling!! Unphased by the flying feet near his head, Dez kicked out the jams and shimmied across the stage. Wearing a tux shirt, gold cummerbund and a skinny tie, Dez also rocked a Captain's hat which he expertly doffed to reveal his freshly shorn locks!! 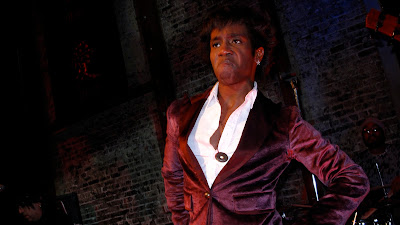 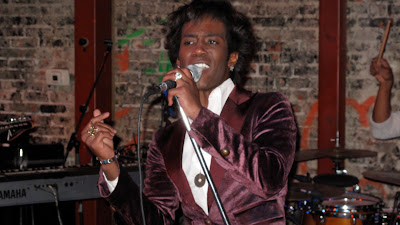 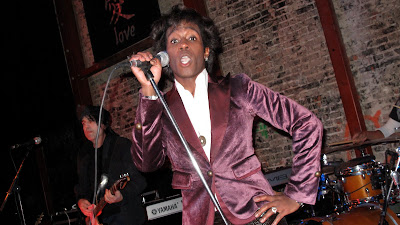 Dezmond Meeks at The Floor (King-King, Hollywood, CA, May 2011)
After the song, he stood center stage and took criticism from Piers Morgan, Sharon Osbourne and Howie Mandel (pictured below), most of which was constructive; the true arbiter - Piers - being overwhelmingly positive. 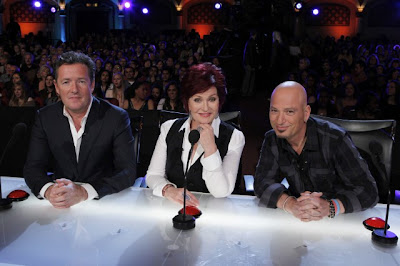 Watch the full video below!
Buy Dez's single on iTunes: Them & Me!