Me And Tasha : Sweaty As We Wanna Be 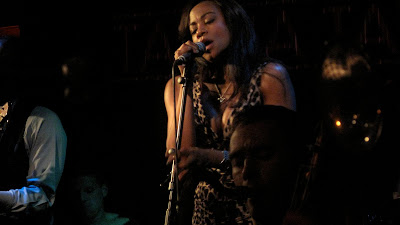 Everyone who has spent any time with me knows that I am sweaty.
Sometimes, on my way somewhere, it starts.
Other times it kicks in once I'm there.

It happens in the checkout line, at the polling place and while I'm clothes shopping. It's distressing and embarrasing and even though everyone's sweaty at The Floor after a bit (so I "blend" in), there are other places where I become very self-concious. Sales clerks have handed me rolls of paper towels and restaurant owners have turned up the air conditioner, all from them witnessing my perpetual state.

I apologized for being soooo sweaty to my city mouse cousin J-HK in NY who saw me after walking several Manhattan blocks to meet him in Times Square. He said "If you don't say anything, no one will notice". Not sure if that's true or not.

I've also traveled with towels and handkerchiefs and multiple shirt changes. I've tried a few anti-anxiety meds, some work better than others. When I work out, I have to wear a headband to keep the sweat out of my eyes and even then it gets drenched and starts to drip after a half hour. 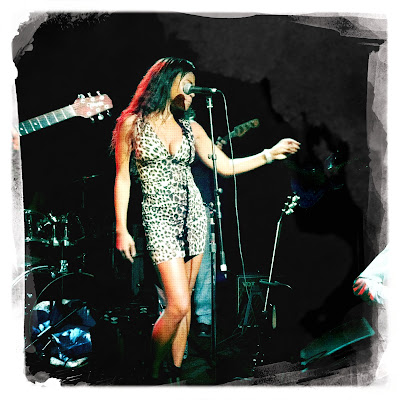 Tonight I saw Tasha Taylor.
She had a small terry-cloth that she used to dab herself dry in between songs. She dabs at her forehead, upper lip, neck and breasts. She looks sexy as hell doing it. That's not how I look when I'm sweaty at all. But I empathize completely.

Tasha Taylor earns her sweat though.

The daughter of R&B singer Johnnie Taylor, she's onstage under hot lights singing her heart out, even covering one of her father's most famous -"Who's Making Love". She looks great in skintight animal prints and teasing above-the-knee hemlines. Her voice is filled with effortless gospel soul and her original songs are truly in the spirit of the classic r&b I grew up with, without sounding "retro" in the least. Her album Taylor Made is full of radio-ready cuts like "Queen", "Somebody" and "Refund"(watch the video below for an excerpt from this wickedly groovy jam). It's 'I'm-singing-my-heart-out-even-though-I'm -sad-as-hell' kinda music.


One of her father's songs is "Your Love Is Rated X". With it's trumped up sexuality, it's sweetness is revealed when J.T. says that "'X' means you're 'X-tra Special'".

One of his other hits, "Disco Lady" features a Marvin-esque burst of unrepentent horniness as he stands back and watches this lady do it in the way he likes!
The hook goes something like this:
"Shake it up /shake it down /move it in /move it 'round /Disco Lady."
"Disco Lady" also features a bad ass guitar solo, throbbing bass and pre-Chic disco purity. "Disco Lady" was the first ever certified platinum single (two million copies sold) and he made history again when he performed at the 1972 Wattstax concert at the L.A. Coliseum.

Cheers to Tasha Taylor who performs at Harvelle's in Santa Monica every Tuesday night.