Having recently been able to watch photographer Austin Young in action [9/19/11 - Young Nudes On The Beach], I went to the East Village West opening at the Royal/T. Austin's California New Wave collection was on display, and Austin himself was taking photos of attendees willing to get a "new wave" makeover. Austin's group (including Andrew, Taryn, Squeaky and Fade-Dra) applied make-up and avant garde couture to a host of excitable folks of spanned generations; those who partied at this saudade known as Club 57 and those NOW who worship this era even though it would be a solid decade or two before they took their first breath of life. 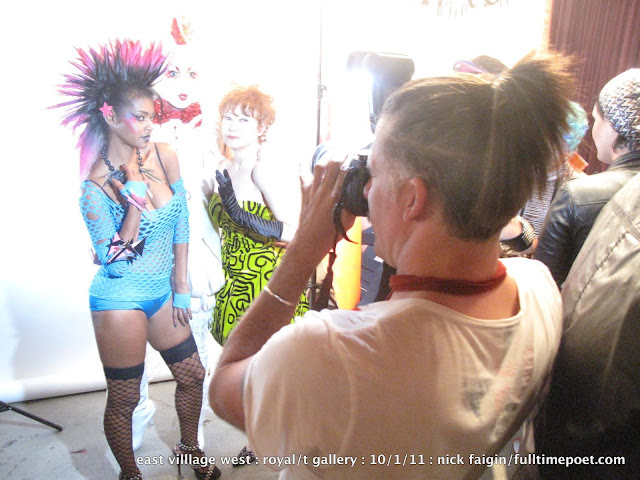 [Austin Young's website]
The main part of the exhibit was curated by Ann Magnuson and Kenny Scharf; a collection of art from New York City’s neo-Dada 1980s art movement. (fyi-the exhibit runs until January 10, 2012).
A mix of ephemera included collections as diverse as monster movies, hip-hop culture, Klaus Nomi, Marilyn's tombstone, club flyers, space age 3D animation, burlesque and fashion.  As colorful as the exhibit was, the opening night crowd was appropriately adorned. Princess Poppycock was in attendance. And if you came looking drab, Austin's crew could new-wave-itize you. ("New Wave makeovers featured electric airbrushing and credit card blush! Make-up provided by MAC.")
see slide show below
The music of this era was played, mixing the new wave "rock" with the funky music that is the heartbeat of 80s NYC. Due to the appearance of tracks by ESG, Bow Wow Wow, Klaus Nomi, The Chakachas, Blondie, The Jimmy Castor Bunch and many more, I consider it essential listening.
Check it out here [Club 57 Mix] 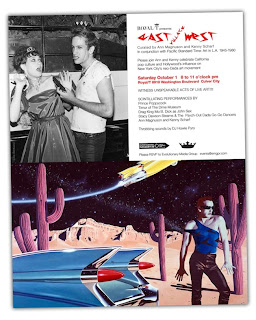