ENO : There's a GLITCH in the system 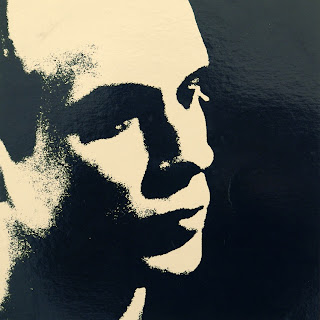 In high school, we were fond of saying "ENO is ONE". We listened to the first 2 Roxy Music albums and argued Brian vs. Bryan, trying to determine whether Eno deserved to be booted from the band for screwing with the sound of Ferry's voice. We played with Oblique Strategies cards. We disassembled our parents old audio equipment and built our own synthesizers. We worshipped Music For Airports and Frippertronics.[FrippertronicsWikipedia][Frippertronics video demo].

Fast forward - one day - don't quite remember the date, we all looked at each other and said "Eno's producing U2?"
In a miraculous case of the artist getting paid, Eno got his, and was able to create some art for the masses in the process - adding his magic ambiance (he practically owns the word) to U2's super-hits - especially the ones with the sing-along choruses and Lennon-ian messages of peace. Eno's influence on the band helped make them one of the biggest of all time. Side note: Brian Eno produced the first Devo album!

My love of Brian Eno goes deep.
My favorites are his un-ironic version of "The Lion Sleeps Tonight" (push play on the video box below to hear it) and I've always enjoyed his slowly melting version of Pachelbel's Canon on Discreet Music. Part of the reason I'm fond of DM, is the liner notes in which Eno explains how he discovered a different way to hear music - as part of the other sounds in and around him - this being an attempt to re-create that. Additionally, his 4 "Pop" albums - Taking Tiger Mountain, Before And After Science, Another Green World and Here Come The Warm Jets - deeply influenced my attempts at songwriting both musically and lyrically in my earliest high school garage bands (for better or worse).

Not so side-note : Eno discovered and utilized the considerable talents of a Canadian guitarist named Daniel Lanois. They met during the recording of the Dune Soundtrack).  Lanois has been involved in U2's songwriting process as well as mixing and production of The Unforgettable Fire,  The Joshua Tree (1987 Grammy Award for Album of the Year), Achtung Baby, All That You Can't Leave Behind and the band's last one, No Line on the Horizon.

In the late 80s, Eno had an art exhibit in Santa Monica. He had been in Art Forum magazine (A transparent "flexi-disc" of a piece of music called "Glint (East Of Woodbridge)" was included - I have one) and this was something of a big deal. I remember the show as being in a very dark room with quiet ambient "music" playing and light coming from multiple television monitors.  I remember seeing him standing in front - but to the side - of one of the TV screen installations, softly speaking to someone. I remember getting a rush of excitement being in such close proximity.

In a Warholian prophecy come to life, the artist - even in the shadows - standing still - simply speaking softly - that's what gave me the thrill. Not the "art" itself. That's what I remember and I remember everything else as just what you'd imagine an Eno exhibit to be - as I mentioned above, dark lighting, lighter than air "music", cool air circulating while television monitor installations broadcast ambient art; slow moving, subtly shifting, infinite upon itself, forever evolving colors and patterns. 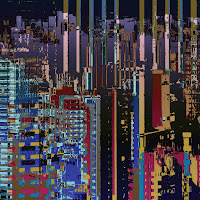 Eno's most recent release is a collaboration between himself and British poet Rick Holland called The Drums Between The Bells. This time, Eno has written music to which spoken word is delivered. The poet's figurative (and literal) voice varies, as do the musical styles.

Glitch is a rock anthem if rock anthems were written by robots - Holland's poem is in there somewhere, although it's hidden in a Kraftwerk-esque voice - the music track itself is straight up dance floor rock 'n' roll (the bonus CD has an instrumental version re-titled "Itch"). 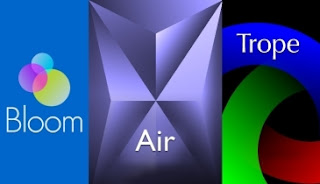 Eno has always explored mediums other than music or video. It's no surprise he's been in the "app" biz for a minute. All three of his apps : "Bloom","Air" and "Trope" are sound and vision intensive interactive experiences, that allow you to engage with your touch screen changing sounds and colors - or set it to generate it's own quiet chaos. It has a sleep timer built in, so it's a perfect "zone-out" tool. Once you're out, then it shuts itself off.
I love technology.