Heather Watch : You're Nobody Til Somebody Kills You 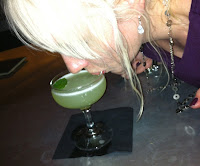 Returning to Freddy's on a Saturday night for the purpose of visiting Heather and checking out the late night menu.

I'm tempted by the "Crispy Pig's Ear And Fried Egg" - I get a visual of a dark brown deep-fried ear on a plate next to a sunny-side up egg. I mentally gag a little : Heather assures me that it's not what it sounds like -  and that the ingredients are inside a big fluffy bun. My curiosity will remain for now - I ordered the Belgian waffles (with bacon butter, maple bourbon syrup and grilled apples.)
[Here's my food review: The waffle was light and airy, and didn't turn to mush under the syrup and butter. it's slight crispness remained throughout from first bite to last. The combination of ingredients created a dish whose ingredients built on each other from sweet to salty - with degrees of both in various increments. 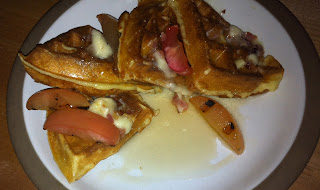 The pieces of bacon within it's butter base added the right shading of salt (I don't know if the bacon was cooked in the butter or added to it). The apples were lightly grilled, and slightly sweet. The true sweetness came from the maple syrup and with it's bourbon kick, it allows for the flavor without the alcohol. It was quite delicious and the portion was perfect for a late night bite (It was about 11pm). My compliments to Chef Charlie!]

Tonight Heather wonders whether or not to dye her hair dark. She's been blonde forever, but has been told she might be taken more seriously and thusly more successful at her (day) job if she were a brunette. (She is a rep for several fashion designers.) She was asking some of the patrons what they thought. I happen to have several photos of Heather in my phone. In many of them she's wearing various wigs. From a short blue/black bob to shoulder length feathered ginger job, she has had many looks which she can pull off. She's got great features and great skin, so she really could never look bad. She takes my phone and shows the photos to the customers who she has engaged, to help them vote "yay" or "nay". For the record, I think she should do it. Her (day job) boss is a very successful business woman and sounds like someone who knows her business. Heather respects her opinion quite a bit.

Heather's a mid-western-raised, downtown girl who has been in L.A. long enough to know her worth, but not so long that she has a list of wannabe actor/rockstar ex-boyfriends or a drug habit. She's pretty grounded for someone her age and with her ambition.

That's enough analysis for now.
Watch this space for the dilemma's resolution!!

I'm was planning on stopping by for a bite and then going to Eastside Luv, but I started talking to the manager of the bar and then he pulled out a bottle of Absinthe. It seems like a lot of stories that start that way end badly.
Posted by Nick Faigin at 12:17 PM