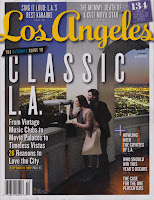 The current issue of Los Angeles Magazine ("Classic L.A." issue) features a glowing review of my favorite Westside bar. If you read this blog, then you are already aware of Harvelle's.
If not, check out the write-up, and if it sounds good to you, come pay a visit.
Besides the decor and the speakeasy vibe, besides the custom cocktails and authentic nightly blues & jazz, there's always plenty of parking in the structure adjacent to the club and there's a spot next door (West 4th/Jane) that serves great food (you can order and have it delivered to the bar) until about midnight. If you love live music, enjoy a night out dancing, or imbibing with like-minded people over delicious one-of-a-kind cocktails, check out Harvelle's (1432 4th St. between Broadway & Santa Monica Blvd. in downtown Santa Monica) [Harvelle's Santa Monica]
Some other things you may not be aware of:

Harlow Gold - the spectacular underground burlesque revue that consistently sells out (It's the last 2 Thursdays of each month - reservations are highly suggested.) [Reservations link]
There's Westside Wednesdays - local Venice collective House Of Vibe All Stars mid-week massive that combines live hip-hop, reggae, jazz, funk and r&b played by some of the industry's most in-demand musicians. [House Of Vibe All-Stars]
Every Monday night is Ultralove - infamous local singer/songwriter who's faithful fan base makes a ritual of kicking the week off with a dose of the band's illest medicine. [Ultralove]
And there's The Toledo Show.
The longest running show of it's kind, having just celebrated it's 10 year anniversary at Harvelle's, it's a wild burlesque road trip to hell and back. The must-see spectacle is a Westside institution and you really should be indoctrinated. Every Sunday night, the tall, dark and handsome Toledo Diamond mounts his Show - his gravely baritone tells erotic stories of hard living in the back alleys of this grimy urban metropolis, while the impossibly funky band jams tirelessly. A bevy of dancing "Dames" gyrate electrically throughout the evening, enticing you with their bouncy bodices, ripped stockings, red lips and high heels. They're a thing of beauty. [The Toledo Show]
Last year, the up and coming Vintage Trouble left their sold-out year long Tuesday night residency at the club to launch their first European tour. They've been back twice since and are currently in Australia playing sold-out stadiums and festivals. They will be back in Europe this summer touring with Lenny Kravitz. Congrats to VT for being the next big thing. It's completely deserved. [Vintage Trouble]
Additionally, there is now a second Harvelle's in Long Beach.
Larger in size with the same attention to lighting and sound, the venue is garnering accolades and the response has been overwhelmingly positive. The bluegrass/ragtime of Capt Jeffrey & His Musical Chumbuckets have been packing 'em in on Sunday nights (Phil Alvin of The Blasters has stopped by and sat in a couple of times). The very cool The Vespertines take over on Monday nights. And on Feb 4, Sheila E. will be bringing her family (Pete, Juan, and Peter Michael Escovedo) for what promises to be an exciting night of incredible latin flavored funk!! That's what the Escovedo's do!! The club is located at 201 E. BROADWAY beneath The Congregation Ale House [Harvelle's Long Beach]
Posted by Nick Faigin at 4:09 PM