After The Dance: In The Presence Of Leon Ware!! 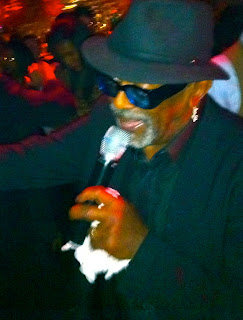 Last night I was privileged to celebrate legendary Leon Ware's 72 birthday and 50 years in the business. [official website]
Leon Ware's a singer, songwriter and producer best known for crafting the hit album, I Want You with Marvin Gaye. Ware's notable for writing the Top 5 R&B single, I Wanna Be Where You Are for  Michael Jackson in 1972 and creating the Body Heat album with Quincy Jones. He collaborated with Maxwell on his debut album Maxwell's Urban Hang Suite. 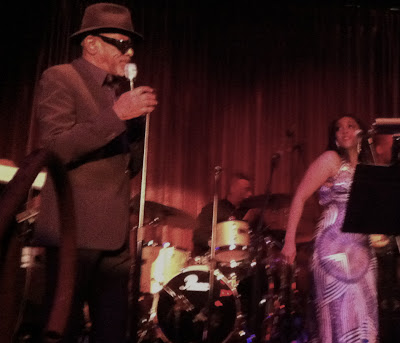 This night represented a lifetime of hits and a rare legendary performance! My friend Nikki Grier is his longtime back-up singer and tonight the 2 of them along with with a 5 piece band
lovingly played Leon's best of the best. It is positively chill-inducing to hear I Want You sung by the man who wrote it. Such a beautiful song and so closely linked to Marvin Gaye, if anybody has a right to sing it, it's Leon Ware. His voice is strong and soulful as hell, as is Nikki's (who was quite sick, but didn't show it at all).

Leon spoke to the audience a lot between songs, always steering the patter back to how horny and virile he is even at his advanced age. ("I may be old as stone, but I can still bury the bone!") It keeps Nikki and the band amused and laughing. He did take time out to eulogize Whitney Houston and Don Cornelius - and played After The Dance in their honor (the song features the lyric: "you were looking good on Soul Train...").
Additionally, the club presented Leon with a beautiful birthday cake and passed out b-day cupcakes to those in attendance.
Some of the music mentioned above is available to hear right here:

Labels: i wanna be where you are, i want you, leon ware, marvin gaye, maxwell, motown, nikki grier, the edison, urban hang suite