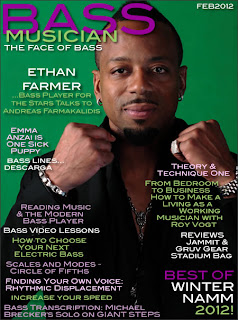 Chicago native Ethan Farmer plays bass at The Floor Improv Night. His album Wine and Strings is a major funk contribution!! Read the cover story on him in Bass Magazine and buy Wine And Strings on iTunes.  For more info on the guy known as "Ebassman" check out Ethan's official website.
Ethan has played with some of the industry's biggest hit makers including Janet Jackson, Eric Benet, Babyface, James Ingram, and when in Christina and Nelly's  Tilt Ya Head Back, when Nelly says "Somebody gimme a baseline", he's talking' to Ethan Farmer! Ethan grew up in a musical family that had a gospel band in which Ethan played bass, which he picked up at the age of 5. Check out the video below of Ethan doing what he was born to do!