The Decoders are Los Angeles-based producer duo Itai Shapira (producer/engineer & studio/live musician) and Todd Simon (trumpeter/arranger for Mayer Hawthorne, TV On The Radio, The Lions, Quantic, etc.), with contributions from Quincy McCrary on keys (Mayer Hawthorne) and Blake Colie on drums (The Lions) . The Decoders have just released their first installment of modern-Jamaican Lovers Rock-inspired versions of soul classics they dug up from the vaults of the Music Sales publishing catalogue. The project is overseen by the songwriter and producer behind many of Minnie Riperton’s hits - Richard Rudolph. The Decoders have enlisted the help of vocalists Sy Smith; original “Baby This Love I Have" songwriter and legendary producer Leon Ware; Coco Owino; Kevin Sandbloom and Boston Fielder. Written by Charles Stepney and Richard Rudolph, Produced by Itai Shapira and Todd M. Simon. Boston Fielder (Vocals), Itai Shapira (Bass/Guitar/Piano/Rhodes), Todd M. Simon (Trumpet/Flugelhorn/Glockenspiel), Miguel Atwood-Ferguson (Viola/Violin), Blake Colie (Drums) 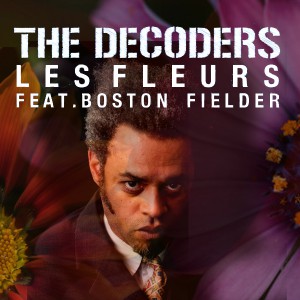 The most telling traits that define the excellence of Boston Fielder and The Decoders’ recently released cover of Minnie Riperton’s legendary 1970 single “Les Fleurs” are defined in everything the song is not. Says Fielder, “When Itai (Shapira, of the Decoders) first approached me about ‘Les Fleurs I was flattered,” he continues, “but also tickled because my natural vocal register is on the opposite end of the scale from Minnie’s.  I enjoyed the subversive simplicity of that idea and, of course, having Richard (Rudolph, Riperton’s widow) offer great encouragement about my approach was wonderful.”
This song is everything right about what happens when talented session musicians and professional vocalists realize goals. The work here is straight up and without a chaser, the path of least resistance hopefully taken to the road of greatest success. The billowing builds and Riperton’s five-octave vocal range aren’t here. But what IS here is excellently rendered. Some of LA’s top session players sit in with MuthaWit frontman Fielder and deliver a reggae-tinged ballad that keeps “Les Fleurs” initial beauty, but covered has a dynamic energy all its own.
From the Brooklyn Bodega blog
Read the article [here]


Minnie Ripperton version from the album Come To My Garden (1970)