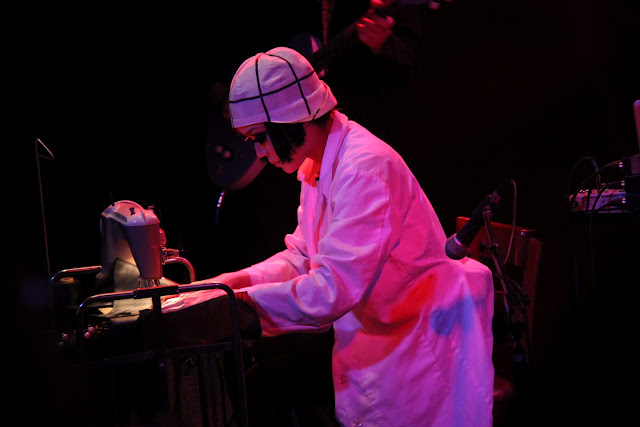 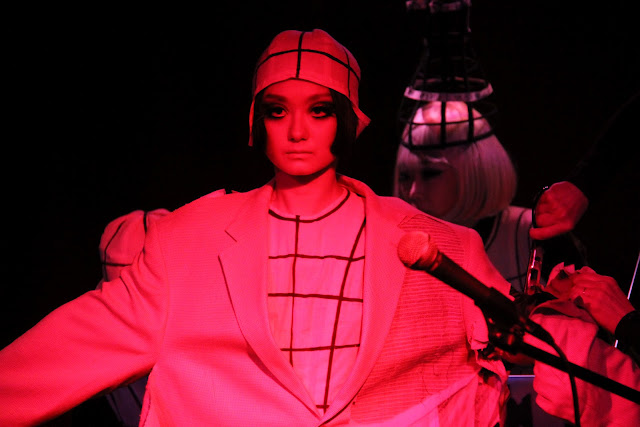 Lun*na Menoh is someone I have known for decades. First meeting her when she made an appearance on the 80s public access show Tea With Tosh, which featured her radical fashion designs and unique combo of the fun and the funky. (She later married Tosh!). Lun*na has had a few bands - the space rock theremin driven duo Seksu Roba, the completely rockin' Jean Paul Yamamoto (featuring Shin Kawasaki on guitar and Alan Myers - originally from Devo - on drums) and now Sewing Sisters. An augmented duo, Lun*na and partner Tsugumi Takashi make electronic music fit for work or play. Using sewing machines as percussive instruments, Tsugumi stands in the back pushing buttons and making the bulk of the beautiful noise while Lun*na commands the stage on vocals. Moeko and Natsuki aka The Sewing Twins actually sew and create on stage. Tonight, they converted an umbrella into a scarf and later, Lun*na turned Moeko's (or was it Natsuki's?) egg-shaped full-body pod into a couture tailored suit. Check out the video below!
Featuring Kenji Koyama on guitar, he played it over-driven and ambiently, reminding me of the way the '80s group Japan utilized the playing of Masami Tsuchiya (Ippu-Do) as textural. Mike Penny played a modified version of the 3-stringed Japanese folk instrument known as the Shamisen, solo-ing on it in a way it was never imagined.
The attention to detail is beauty in itself. Never a dull moment on stage, Lun*na - who makes wearable art when not pursuing her music career - always brings surprises and freshness to any room. [Lun*na's website] [Lun*na's facebook page]


Tosh was there and the back of his head is featured in the video below. Good lookin' out to Mr. Berman AND my dear friend Squid who was also in attendance!


Hello would you mind sharing which blog platform you're working with? I'm planning to start my own blog in the near future but I'm having a difficult time deciding between BlogEngine/Wordpress/B2evolution and Drupal. The reason I ask is because your layout seems different then most blogs and I'm looking for something unique. P.S My apologies for getting off-topic but I had to ask! capital one login

Lucky Club Online Casino UK | Live Dealer Casino UK
Lucky Club is luckyclub a new and exciting online casino powered by Pragmatic Play. It is an authentic brand with amazing features. The welcome bonus is a